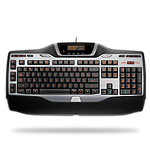 According to Logitech website there are currently three OSes supported for its G15 keyboard: Windows XP, Windows Vista and Mac OS X. The driver file is labeled as [Game Panel Software] and from the look of it I guess the name came from the fact that it offers LCD applets (panels) for gaming purpose.

Below is a list of features supported by this driver. After installing the driver you will be able to see:

This site uses Akismet to reduce spam. Learn how your comment data is processed.